Tassajara is a forty-two square mile area located south and east of San Ramon and Danville. This area was protected by a fire brigade long before the brigade was recognized as an official fire district by Contra Costa County. Initially the residents received their fire protection from the "Eastern Fire Protection District." The EFPD was zoned as F2, meaning that responding units traveled from the Moraga area. Typically response times were 45 minutes starting from the time a report of a fire was made. Consequently, by the time of EFPD's arrival, property damage was usually significant. To counter this dilemma, the 180 local residents decided that they would rely on themselves for fire protection.

Local farmers organize fire training drills to establish a team and to sharpen their fire protection skills. It was agreed that if smoke was spotted out in a field, or on a hill, the farmers would stop what they were doing and go assist their neighbors with the fire protection methods practiced. Fires were fought by the use of personal pickup trucks, tractors, farm equipment, wet sacks, shovels, and whatever water supply was available until the arrival of the Eastern Fire Protection District.

TFD was established as a dependent special district under the supervision of the Contra Costa County Board of Supervisors. All fire commissioners were appointed by the board - not elected. The Commissioners would be held accountable to the board of supervisors. The original Commissioners of the Tassajara Fire Department were Gordon Rasmussen (President), Dean Watts (Secretary), Albert Hansen, Henry Bettencourt, Jorgen Claussen (Commissioners) and Valley Community Service District Fire Chief Phil Phillips served as the temporary Chief until July of 1970 when Warren Reinstein took over as the full time Fire Chief. 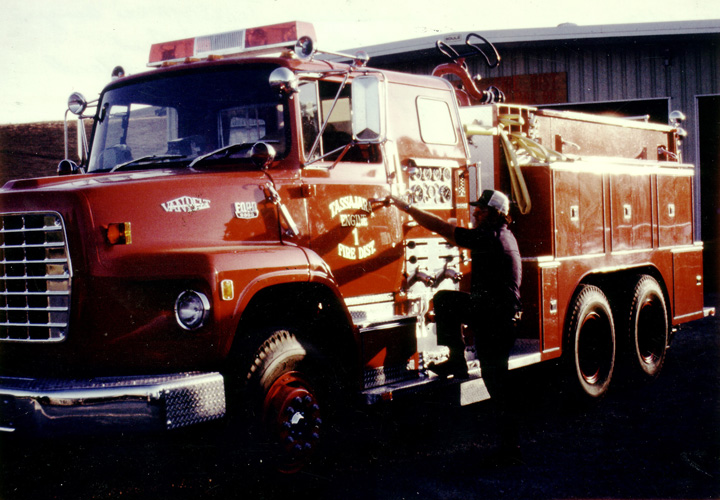 The District began with three fire trucks, fifteen volunteers, and a "Class 10" Pacific Fire Rating. Residents donated their barns and sheds to house the fire apparatus until they were needed to store their hay for the summer. Fire apparatus were old retired rigs from other departments that were purchased at county auctions. Replacement parts were purchased from junkyards and all mechanical/maintenance was performed by volunteers. Although the district was tax supported, it had no direct authority to levy taxes to help fund the department. Funding was raised through dances, BBQ's, donations, volunteer dues, and other events. TFD was also deeded the Tassajara school house on Finley Rd. The school house was where all board meetings and events were held. The TFD was responsible for restoring the school and for general upkeep. The old school house became a very important part of the district because it became a place where fire department personnel and the community could come together.

The district held monthly training for its volunteers which included: hose/ladder evolution, pump/apparatus training, discussing response tactics/strategy, and first aid/CPR training. In 1973 the Women's Auxiliary Fire Brigade was formed as a separate but equal unit. The women had their own training sessions and were trained to the same standards as the men. They had the right/authority to respond to calls and help in any way possible. The Women's Auxiliary Fire Brigade was a very useful and valued part of the District.

In 1975 an acre of land was purchased from Commissioner Jorgan Claussen on Tassajara road, north of Highland road that served as the site of the District's first official fire station. A new well was drilled and a 12,000 gallon water storage tank/pump was donated by the Southern Pacific Railroad in 1976. Construction was completed in 1977, and the station was officially put into service by 1979. This station remained occupied by the San Ramon Valley Fire Protection District until March 23, 2009 when it was relocated to its present site on Lusitano Street in Danville (Station 36).

Fire Chief Warren Reinstein passed away in 1979, which brought a change to the district. Dougherty Valley Fire Chief Phil Phillips who had been the "big brother" to Tassajara Fire Department since its beginning, became the interim Chief for the following six months. Assistant Chief Steve Eppler was then promoted to fill Warren's former position as Chief. Along with the commissioners, Chief Reinstein and all the families and volunteers built the district from an unofficial fire protection brigade to an established and flourishing department. At the time of Chief Reinstein's death, the department had grown to over 50 volunteers, five fire apparatus and a station.

The final Fire Chief for the District was Steve Eppler. He served for a number of years as a part-paid employee single-handedly managing operations, administration and other key aspects of the District. Chief Eppler had a dedicated volunteer force that served the community faithfully. Unfortunately, as happened to the other districts, the community complexion started to change and the residents were less often employed locally and more often commuting to their jobs - leaving no one available during large parts of the day to provide fire protection. This development spelled the end for the mostly volunteer district, and in 1990, it was absorbed into the San Ramon Valley Fire Protection District.