In 1963, the San Ramon Fire Protection District was formed to serve the area of San Ramon to the County line.The decision to form the District came from a dissatisfaction with the way the taxes from the community were being distributed by the Eastern Fire District. Howard Wiedemann and Bill Fereira circulated a petition throughout San Ramon. All but two of the residents signed in favor of the proposal. Armed with this mandate they set about creating a Fire District.

The District was formed as an autonomous special district. This meant that the Board of Commissioners were a locally elected body with complete decision making authority and answerable directly to the local voters. The initial directors were Howard Schlessinger, Howard Wiedemann, Armand Borel, A. C. Johnson and L. A. Davidson.

The autonomous District was actually an accident. When Bill Fereira and Howard Wiedemann decided to try to create a separate fire district they contacted an attorney named Bob Eshillman to assist with the legal process. The attorney had a decidedly hostile relationship with one of the county Board of Supervisors. This Supervisor thought he was hurting Mr. Eshillman by engineering the paperwork to make the District autonomous. This ploy nearly worked. For several months the newly created district was not able to levy taxes, the County refused to lend it any money, and the Eastern District removed its equipment. With no equipment of its own, Bill Fereira scrambled around to borrow a pick-up truck and some rudimentary fire-fighting equipment.

San Ramon consisted of a small commercial area to the north of Crow Canyon Road, primarily along San Ramon Valley Boulevard and a large area of rural farm and ranch properties to the south. The largest employer in the area at that time was the Bishop Ranch. This was a working ranch - not the large business park with the same name omnipresent today. The District grew from the influx of industrial employers moving into San Ramon. Companies such as AeroJet (Aerospace), Filper (Automated Fruit Handling Equipment), MBA (Military Weapons and Research) and EG&G (Government Research), chose to establish facilities in the area of northern San Ramon.

The original fire station was located in what was a car servicing facility, owned and operated by Bill Fereira. Bill was also the mechanic for the Eastern Fire District. He would leave in the morning and spend all day on a 100 mile trek to all the Eastern Stations located in Antioch, Pittsburg, Marsh Creek, Tassajara and Moraga and finally back to San Ramon. After the formation of the District the entire building was made into a fire station. The firefighters and apparatus shared the apparatus floor for some time. Eventually, the apartment building in the rear was included in the station to house the firefighters. Not long before the merger of the Danville and San Ramon Districts, a "Butler" building was constructed on the land next to the fire station.This new building housed three apparatus bays, which left enough space in the old building for offices and the firefighters. The fire station building is now once again a car repair shop located next to Morgan's Masonry Supply in San Ramon. 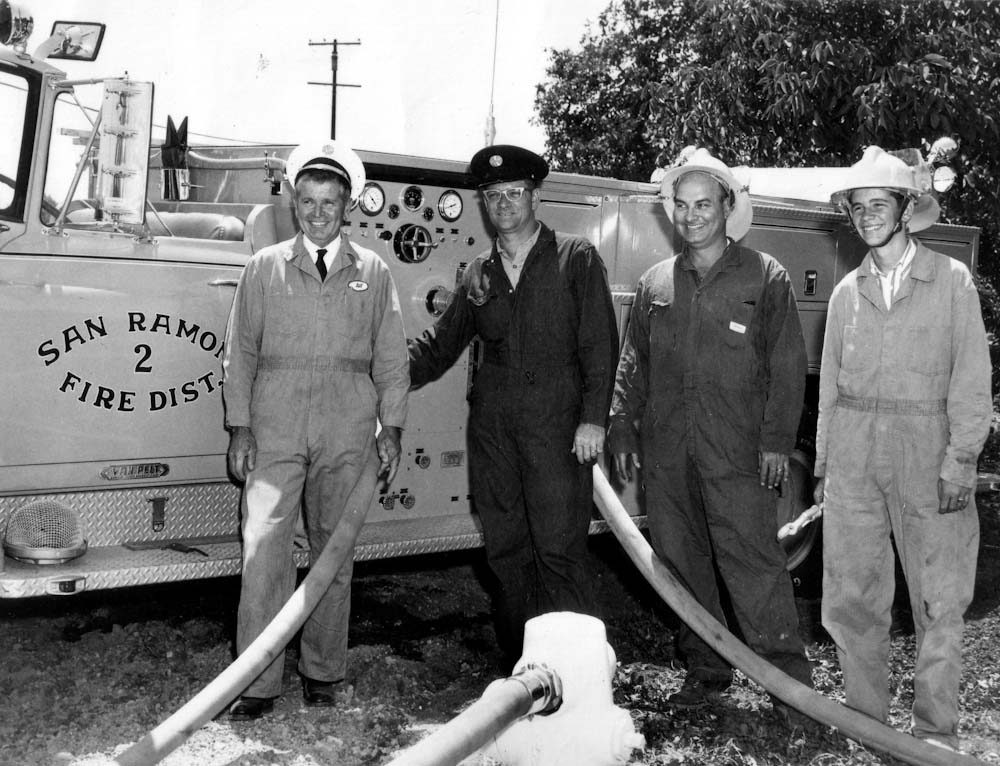 From its inception Bill Fereira was the Fire Chief and in 1965 he was hired as the first full time employee. He served in that capacity until his retirement. Prior to Fereira’s retirement, Richard Schuller an Oakland Fire Department Battalion Chief, was appointed Fire Marshal. Chief Schuller was then promoted to Fire Chief of the San Ramon Fire Protection District in 1977. Chief Schuller served in that capacity, for one and one half years, until he submitted his resignation in 1978. After Chief Schuller's resignation, the Danville Fire Marshal Roy Asmundsen was appointed Chief. The District's fire insurance class was improved from an ISO Class 7 to an ISO Class 5 in 1968.