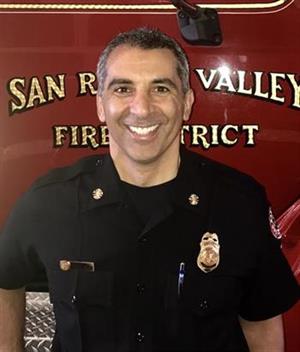 Paige Meyer was appointed as the San Ramon Valley Fire Protection District’s Fire Chief on March 18, 2013 and serves as the Chief Executive Officer and the highest-ranking officer in the Fire District. In addition, Chief Meyer currently serves on the East Bay Regional Communications System Authority Board of Directors, is Board President Elect of Leadership San Ramon Valley and a member of the Police and Fire Fallen Heroes scholarship committee. He is also the current President of both the Contra Costa County Executive Fire Chiefs Association and the Contra Costa County Chiefs Association. Chief Meyer was appointed as an Honorary Air Force Commander with the Travis Airforce Base in 2018.

Chief Meyer began his public safety career in 1992 as a volunteer Firefighter and later as a Public Safety Officer, with the city of Sunnyvale. He then became a member of the City of Vallejo Fire Department, where he progressed through the ranks of Firefighter, Engineer, Captain, Battalion Chief and Fire Chief. He holds a Bachelor of Arts Degree in Public Administration from California State University at Chico as well as an Associate’s Degree in Fire Science from Butte College.