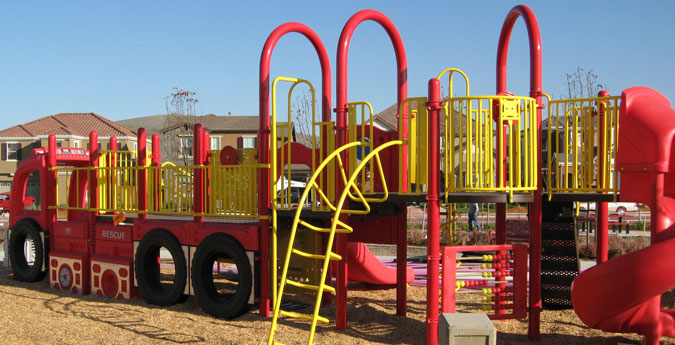 Fire Truck Park is a great local destination for families with young children. In addition to a large San Ramon Valley logo'd fire truck play structure with slides and poles, the park includes a large grass area, swings, tables with a BBQ area and a sand area. There are also game tables and a tricycle circle. Fire Truck Park is located at Arlington Way and Halifax Way in the Windemere community of San Ramon.

A fire safety theme has been incorporated into many design elements of the park including the playground equipment, artwork, and landscaping. Fire Truck Park has several interesting art features and public art pieces. Most notable is the seat wall that separates the sand from the play structures. The side of the wall that faces the sandbox contains sixty unique tiles that were created by the San Ramon Valley Fire Protection District firefighters, staff and their families. Other art pieces in the park include a bronze fireman statue and a fire hose sculpture.