Board of Directors Recognize Local Heroes For Their Life Saving Actions

Four local citizens who participated in the same event will be in attendance and will be recognized as well. The quick actions of these citizen-heroes contributed to saving the life of Danville resident Hadi Esfahani, at the East Bay Sports Indoor Soccer Center in San Ramon. In attendance at the meeting will be six former SRVFPD patients, all of whom had experienced a cardiac arrest, and who all survived these events.

On the evening of November 26, 2019, while playing their regularly scheduled indoor soccer game, as they had done together for more than twenty years; Mr. Esfahani experienced a sudden cardiac arrest, rendering him pulseless and nonbreathing.  The Board of Directors will recognize Citizen-Heroes Farshad Khodayari, Max Saiidnia, Amir Kazemi, and Dr. Omar Basharmal for having come to the immediate aid of Mr. Esfahani, while playing soccer together just two days before Thanksgiving.

In a seamless sequence of events, Max Saiidnia had been the first to act that Tuesday evening, having witnessed Mr. Esfahani collapse after having kicked the soccer ball into play. He alerted other team members who all reacted without hesitation. The group rallied to Mr. Esfahani’s side, and their initial assessment found that he did not have a pulse and was not breathing. Absent any notable sense of panic or confusion, Farshad Khodayari ran to retrieve a cell phone in order to call 911. Max Saiidnia and Amir Kazemi immediately began Cardio-Pulmonary Resuscitation (CPR) efforts. Max providing rescue breathing via mouth-to-mouth, while Amir began delivering chest compressions.

The call for assistance had gone out to the adjoining soccer fields, where Dr. Omar Basharmal had been playing.  Dr. Basharmal arrived to find the group making every effort possible to save the life of their longtime teammate. With his advanced training, Dr. Basharmal provided direction to the group, and later assumed responsibility for providing chest compressions.

This group of heroes did not know they were in a jurisdiction where the Fire District provides all risk emergency responses to fires, medical emergencies, hazardous materials incidents, technical rescues, mass casualty events and more. They were not aware that the Fire District’s state of the art Communications Center would receive their 911 call directly. They did not experience the all too common delay of having these lifesaving calls transferred between multiple agencies. They were not aware that the Fire District’s strategically placed Fire Stations are well equipped with not only Fire Engines, but also Advanced Life Support Ambulances.

What they did know, was that Mr. Esfahani was lying before them on a soccer field pulseless and not breathing, and that they needed help. They hoped their efforts would temporarily support Mr. Esfahani, but he needed the most advanced emergency medical response available, and he needed it to arrive quickly.

Within four minutes of being dispatched, San Ramon Valley Fire Protection District Engine 38 and Paramedic Unit 38 arrived on scene. Upon arrival at the soccer field, the five Firefighters, all of whom are State licensed Paramedics, quickly made their way to Mr. Esfahani’s side. What they first witnessed was his teammates working in unison, providing well executed CPR efforts. The Firefighter Paramedics assumed patient care responsibility for Mr. Esfahani, utilizing their Advanced Cardiac Life Support (ACLS) skills and equipment. This included the delivery of 360 Joules of electricity via a sophisticated cardiac monitor/defibrillator.

San Ramon Valley Fire Paramedic Unit 38 transported Mr. Estefani from the scene and delivered him to the Emergency Room at San Ramon Regional Medical Center in an elapsed time of 16 minutes, from the time of their arrival at his side, to his arrival in the Emergency Room.

Within days of this event, Mr. Esfahani was released from the hospital minus any deficit. He returned home to his wife of 29 years, Zhila, and their two sons Sam and Soren. Mr. Esfahani has since returned to his job as a Construction Engineer and is now a strong advocate for having everyone attend a CPR course.

Save A life – Learn CPR/AED and Become a Citizen-Hero 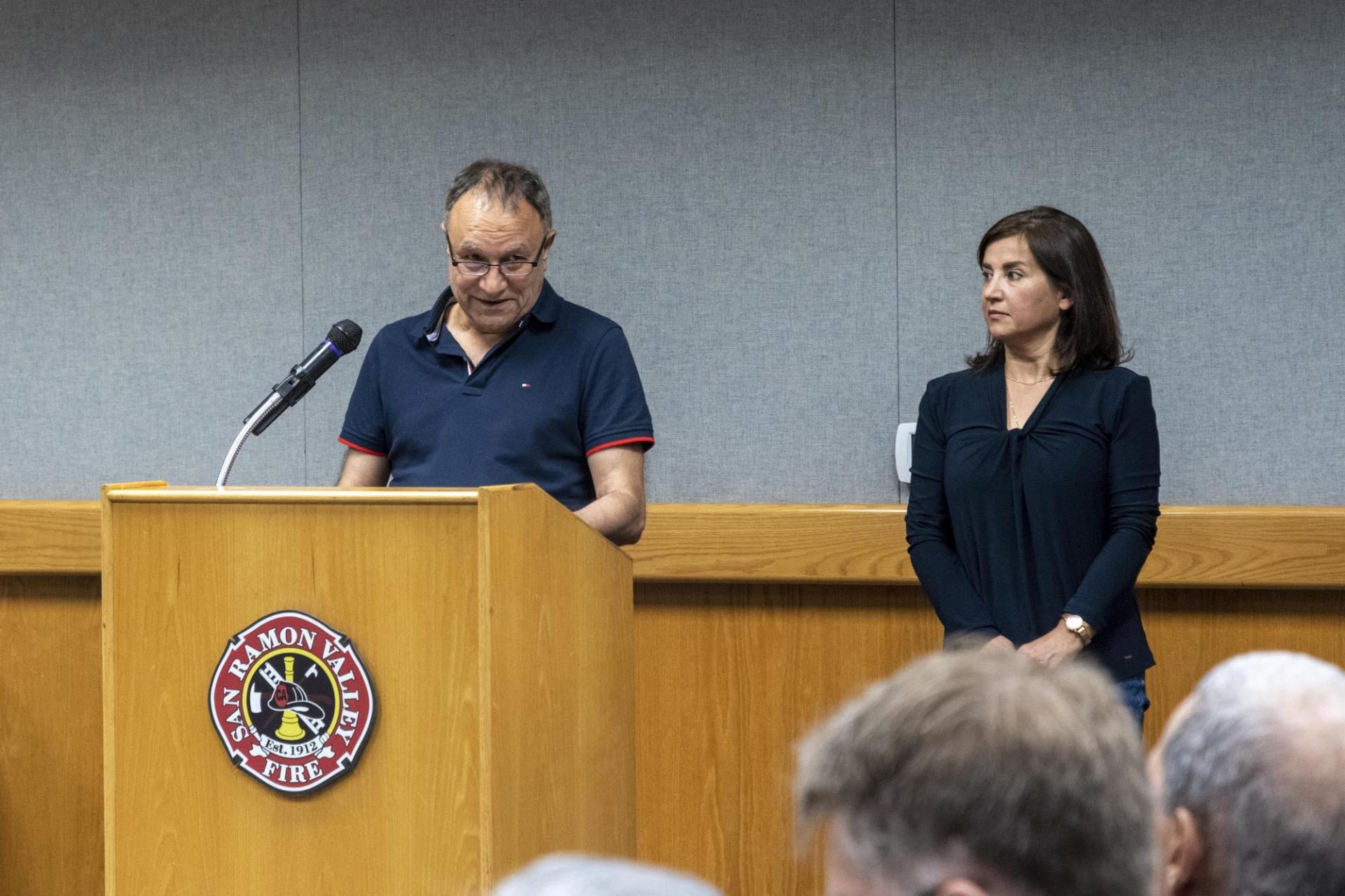 Mr. Esfahani was accompanied by his wife, Zhila. 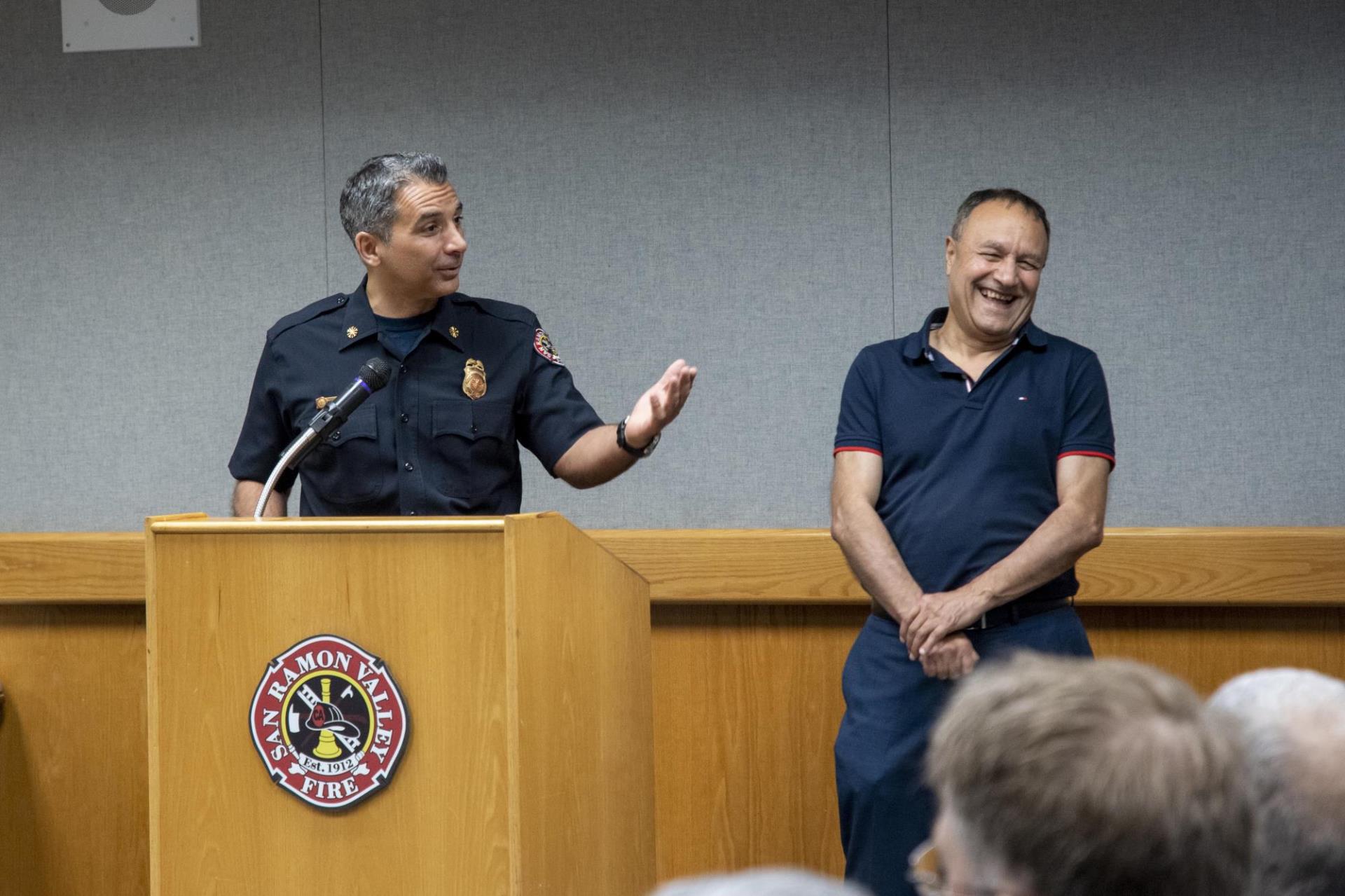 Even in the most heartfelt moments, Fire Chief Paige Meyer can bring a smile to any room. 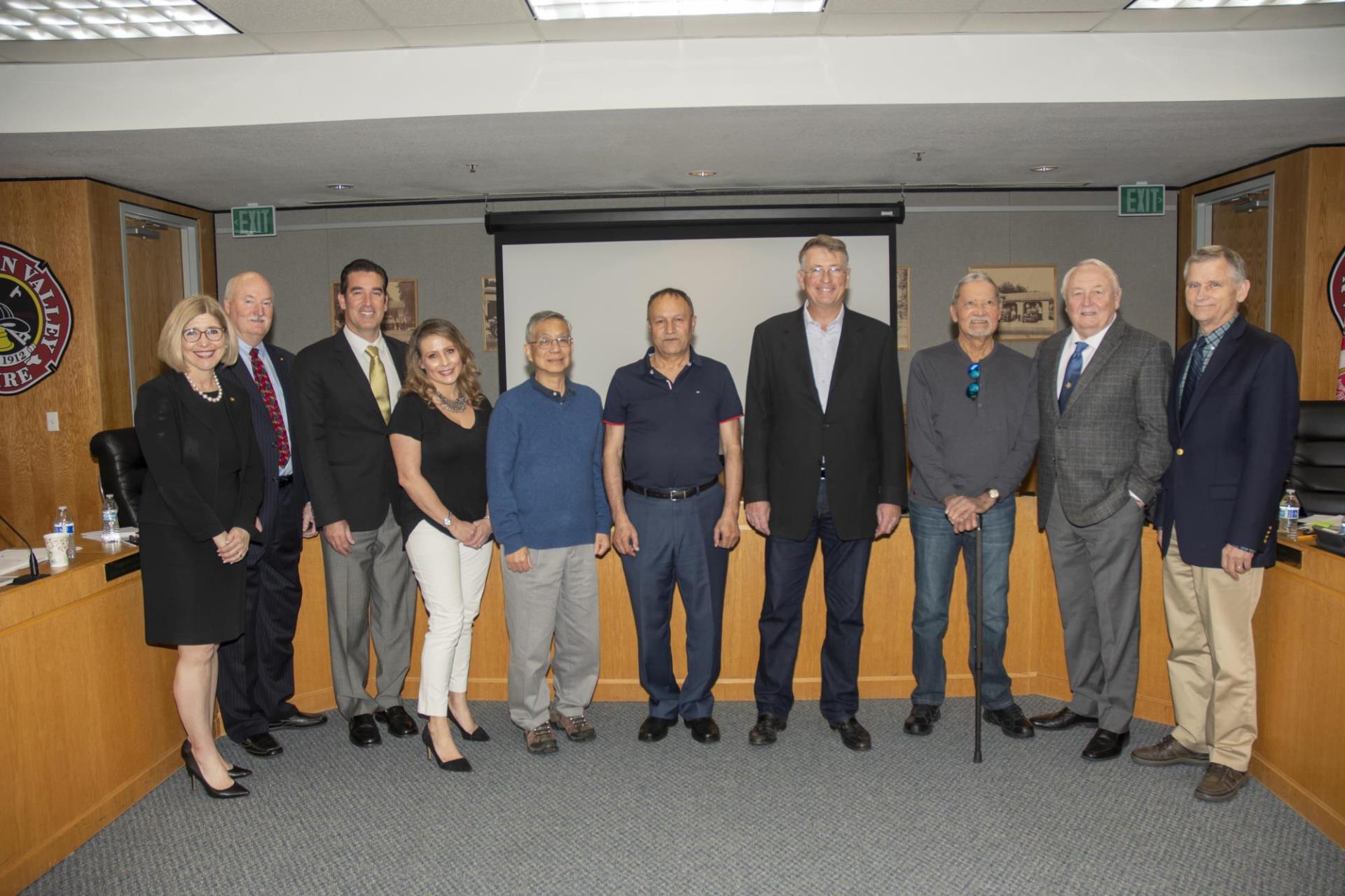 Thank you to the several cardiac survivors who also attended the board meeting in support of the Esfahani family.